Google recently started rolling out a new Adwords bid by position feature allowing bids to be selected based on where you would like your ad to show on the first page. Unlike the old suggested bids for “top of page” or “first page”, this new tool brings up a small window where suggested bid are shown for different positions on the first page.

This new bid by position feature began appearing in the Adwords UI over the past week and was first brought to attention on Twitter by Kelly Baker.

Below are some screenshots taken from our accounts today showing 2 options for selected keywords. Either “above all organic results” or simply “on the first page of search results”. Based on information from other managers who have seen this new feature, there may be up to 3 positions to choose from. The third being “above all other ads”. 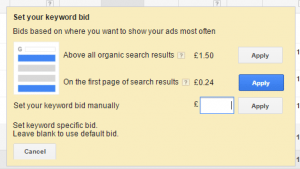 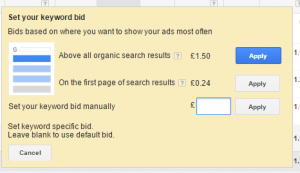 This new bid by position feature seems to be an extension of “suggested bids” from Google to help make bid management easier for new advertisers. It will be interesting to see how this new feature affects average CPC’s across different industries in the months to come.

The old bid simulator tool is not particularly eye catching and would probably be totally over looked by new users, where as this new feature becomes visible when ever you go to change a bid manually within the UI. This means it will be much easier for all Adwords users to choose and set bids based on the first page positions they want. Of course this also means it will be easier for new advertisers to bid for higher positions which they may not have previously, and so will probably encourage bids and competition to increase.

It also seems that the amount of options available to you, are based on your available budget. For example, if your budget is restrained only one suggested bid option for “first page results” will show up. One could argue this limits the usefulness of this feature, and means the bid simulator is still the best option when looking to adjust bids to gain more clicks and impressions based on a daily budget.

This new bid by position feature is still rolling out to accounts world wide but is now being seen in accounts across the USA, UK and Australia.

Let us know what you think about this new feature, and how you think it will make a difference to your account management techniques.

Leave a reply Click here to cancel the reply